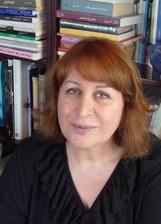 was born in Baghdad in 1952, and studied journalism, working in the Iraqi press and radio. She moved to Paris in 1979 where she gained a PhD and worked as a journalist. She is presently Paris correspondent of Asharq Al-Awsat and Kol Al-Usra newspapers.

She has published two non-fiction books, Lorna, her years with Jawad Selim (Arabic, Dar el-Jadid, Beirut, 1998), and Paroles d’Irakiennes (French, Le Serpent à Plumes, Paris, 2003), and in 2004 made a 30-minute documentary film about Naziha Al Dulaimi, the iraqi woman doctor who, in 1959, was the first woman to become a minister in an Arab country.

Inaam Kachachi's latest novel, Al-Hafeeda al-Amreekiya [The American Grand-daughter], published by Dar el-Jadid, 2008, has been shortlisted for the 2008-09 International Prize for Arabic Fiction.