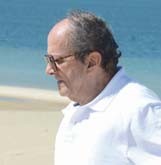 is a well-known Moroccan novelist, literary critic and translator. Born in 1939 in Rabat, and growing up in Fez, he graduated in Arabic Literature from Cairo University, and has a PhD from the Sorbonne.

He was a founder member of the Union of Moroccan Writers and three times its president. Currently Professor of Arabic Literature at Mohammad V University, Rabat, he has written many works on Arabic literature and literary criticism, in addition to short stories and several novels, two of which are in English translation – The Game of Forgetting (Quartet, 1987) and (Al-Daw’ al-Harib) Fugitive Light (Syracuse UP, 2002).

His latest novel, Far from Clamour, Close to Silence, excerpted in Banipal 54 – ECHOES, was longlisted for the 2015 International Prize for Arabic Fiction.