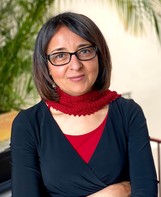 She is an Associate professor of Arabic literature and Middle Eastern studies at the University of Alberta, Canada and has recently resided in Marseille, France, where until July 2021 she held the Albert Camus chair at IMéRA, the Institute for Advanced Study of Aix-Marseille University while working on a book entitled Al Laknah: Al Sawt fee Ghair Makaneh (Accent: the Displaced Voice).

She has five poetry collections published, including Ittisafat [Characterizations] in 1990, Mamarr Mu‘tim Yasluh li Ta‘allum al-Raqs [A Dark Passageway is Suitable for Learning to Dance] in 1995, al-Mashy Atwal Waqt Mumkin [Walking As Long As Possible] in 1997, Jiughrafia Badeela [Alternative Geography](2006) and Mamar Moetem Yasloh fee Talom Al Raks (A Dark Path Suitable for Learning to Dance), which is considered one of the most important poetry books issued by the generation of the nineties in Arabic poetry. An anthology of her works has been translated into more than twenty languages.

Her most recent published works include Hatta Atakhlla Aan Fekrat Al Boyot (Until I Abandon the Idea of Homes) in 2013, Kayfa Taltaem: Aan Al Omoma wa Askhbahuha (How to Mend: On Motherhood and its Ghosts) in 2017, and Fee Athar Enayat Al Zayyat (In the Footsteps of Enayat Al-Zayyat) in 2019., which won the 2021 Sheikh Zayed Book Award in the Literature category.

These Are Not Oranges, My Love, a selection of her poetry translated into English by Khaled Mattawa, came out with Sheep Meadow Press, USA, in 2008.

How to Mend: On Motherhood and its Ghosts was published in 2018 by Kafa Ta and Sternberg Press in English translation by Robin Moger.