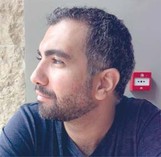 Joseph Fahim is the curator of the 2018 SAFAR Film Festival and is based in Cairo. An Egyptian film critic and programmer, he is a member of Berlin Critics' Week and the Arab representative of Karlovy Vary Film Festival. He is a former director of programming of the Cairo International Film Festival.

He co-authored various books on Arab cinema and has contributed to numerous publications in the Middle East, including Al-Monitor, Al Jazeera, Visions, Egypt Independent and The National (U.A.E.), along with international film publications such as Vérité.