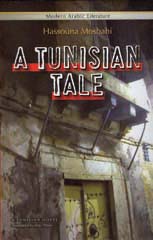 From Death Row – a psychological thriller


Tunisian writer Hassouna Mosbahi’s novel A Tunisian Tale is the first of his novels to be published in full in English translation. It takes the form of parallel internal monologues by a mother and her son, presented in alternating chapters.

The son, Alaa al-Din, is on death row, awaiting hanging for a gruesome murder. The victim was his mother, whom he bound and gagged, threw into a ravine and set alight with gasoline. He claims to have welcomed his death sentence. His mother Najma says she speaks from “eternal darkness” beyond the grave.

The book was originally published in Arabic as Hikaya tunisiya by Dar Kaleem in 2008. Max Weiss’s translation into English is admirably clear and flows easily. The dual monologue structure is effective, and Mosbahi maintains the tension, engaging the reader’s interest throughout. Mother and son each assure the reader they are telling the truth. But their accounts differ not only in perceptions but sometimes in terms of crucial facts.

The son’s monologues are delivered with bravado and a certain gallows humour. At times, however, they make for painful reading, particularly when he depicts his dysfunctional relationship with his mother. Najma confides to the reader that she never wanted to be a mother, and claims that her son disliked her from birth. When he would not stop crying she wanted to “strangle him or smash his head against the wall, or else abandon him”. On his side, Alaa al-Din says that his mother “had no desire for me to exist at all” and treated him cruelly.

In contrast, the boy’s grandmother, a “river that never ran dry of stories”, adored him. She named him after the hero of her favourite story, Alaa al-Din in the Land of Terrors. His father was also loving, encouraged him to do well at school and had high hopes for his future.

Alaa al-Din emphasises that he was an outstanding school pupil, and lists the authors he read. He particularly enjoyed the Rihla of Ibn Battuta, especially the gory parts, and surprised the prison director by requesting a copy on death row.

However, he dropped out of school and his more recent cultural influences have been American movies, especially “Badlands” and “Cool Hand Luke”. Of “Badlands” he says: “I was so attracted to the young man that I started wishing to be like him, always moving forwards, blowing the head off anyone who got in my way.”

Mother and son both try to escape their circumstances. Najma comes from a village famed for its olive oil, prickly pears – and pickpockets. She leaves the village at 19 to marry Mansour, who is “like a sad grey bird that can’t sing”. Despite not loving him, she enters the marriage because he will take her to live in the capital. But she finds herself living in a wretched Tunis bidonville, known as M Slum, full of migrants from the mountains and deserts. The men are mostly unemployed and poor.

Najma longs to leave the slum and starts to visit well-off areas of the capital alone. She meets a woman she knew as a girl who befriends her and finds her work as a maid to an elderly French woman. Najma goes to dances and parties with her friend and admits she fell in love with a few men, but insists these relationships were acceptable as they “never went beyond kissing and light touches.”

Najma incessantly assures the reader she is exceptionally beautiful and always attracting the attention of men. Salacious stories and rumours about her swirl through M Slum, but she denies them. When a gang leader sexually harasses her she goads her husband into confronting him. The thug gives Mansour a dreadful beating and he eventually dies. Alaa al-Din blames his mother for his father’s death and for the things that go wrong for him thereafter. After a time he drops out of school.

Alaa al-Din tries to improve his circumstances by getting a job away from M Slum in a café in the capital, with the help of his new friend Aziz. But to his distress the gang leader who had beaten up his father discovers he is working there and turns up day after day with his bully boys to intimidate him. Alaa al-Din gives up the job and plans to try to migrate to Italy, like so many other young North Africans. But as he slips into fantasy and delusion his resolve that his mother must be killed grows.

Mosbahi’s highly readable novel has potentially wide appeal for readers of English. It can be seen as a psychological thriller, a sample of “North African Noir”. It also shows the sense of alienation and hopelessness and the perceived inequalities in Tunisia on the brink of the revolution that began in 2010.