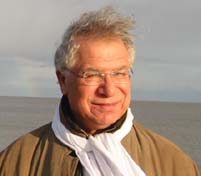 
Mourid Barghouti is best known in English for his memoir I Saw Ramallah which was published earlier this year in the UK by Bloomsbury. But he is more well known in Arabic as a poet, having published thirteen books of poetry including a Collected Works in 1997. He was in fact born in a village near Ramallah, studied English Literature at the University of Cairo, and has lived mostly in that city, having spent many years in exile from his homeland.

A Small Sun is a chapbook of English translations published by the Aldeburgh Festival Trust to coincide with Mourid Barghouti’s participation in the Aldeburgh Poetry Festival in November 2003. Its 30 or so pages are of mostly short poems in translations by the poet and his wife Radwa Ashour (some reprinted from Banipal’s Palestinian issue No 15/16) and with a handful of earlier translations by Lena Jayyusi & W S Merwin taken from the 1992 Anthology Of Modern Palestinian Literature and one short poem in Ahdaf Soueif’s translation. Early poems (Barghouti was born in 1944) are not included and the range is from five collections published in Arabic between 1980 and 2002.

Perhaps it is difficult to evaluate a small selection of poems in translation – does the poet, for instance, also write long poems and poem-sequences? But one complex of feelings and clear truth is set out from the very first, the poem ‘Exception’ that is short enough to quote in full:

All of them arriveriver and train
sound and ship
light and letters
the telegrams of consolation
the invitation to dinner
the diplomatic bag
the space ship
they all arrive
all but my step towards
my country . . .

There in thirty-seven English words is a communal, and not merely a personal, biography that shows the poet’s quality of objective intimacy. The poem ‘Desire’ also has a typically real and bitter twist of beauty that has had to bear witness to personal exile and that is, beyond that, an acute statement of sadness resigned to necessity and calm. In a poem that turns on its exact and accurate detail to evoke absence, and that states the desired present to evoke the absence, the gender shifts halfway, so that ‘his leather belt’, ‘the pair of shoes he left behind’, ‘his scattered papers’ modulate to the subject, the very real ‘she who is still there waiting’ and to the strength of the poem’s ending: “each time the day ends/she reaches out to touch a naked waist/and leans back against the wall”. The subtlety of erotic loss in this poem – as of other forms of loss throughout the collection – is both beautiful and sharply painful, or in other words real. In another poem ‘embrace’ becomes death as ordinarily as does happen, and a child recalls of his grandmother that “on her last day/death sat in her arms,/ and she was tender to him and pampered him/and told him a story,/and they fell asleep together”.

These poems come not written at random, though they have that quality of truths openly come across. The statements are simple and complexly real, lucid with detail: “wooden seats/that have lost their cumin-coloured paint” or “there are inventions/ that do not exist/old age is one of them”. Or at the end of a ‘normal journey’ where everything is as expected “don’t worry,/your son is still in his grave, murdered,/and he’s fine”. Or in the contrasted sameness of ‘A Night Unlike Others’ where the son, a schoolboy murdered in politicised struggle, returns in the poem dead to the family home and “he passes through them/they pass through him/they remain shadows/and never meet” and again the intimacy is painfully objective, the language exact.

In all these poems opened truths in calm language tighten the slack between beauty and reality and their strength is both unobtrusively simple and harsh “leaving this world as it is” with the need for it to be imminently changed. This is fine poetry and maps our inner feelings to daily realities. Both the publication of the chapbook and Aldeburgh Festival’s invitation to the poet in 2003 reflect the albeit slow increase of awareness in this country of the value of translation, and of the vital presence everywhere of many-tongued poetries of exile that reach right into our language.