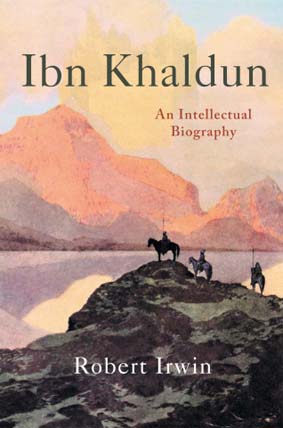 Inspirational polymath in the round

A few years ago I heard Robert Irwin give a lecture in which he said, to a startled audience: “The best Arab writers are dead.” Robert Irwin is completely familiar with the varied writings of classical Arabic and has written on A Thousand and One Nights. He is an anthologist of medieval Arabic literature and has also been an academic historian and is able to locate writings in the social and historical context. He is also an imaginative novelist. Most of these skills have been poured into this work on the fourteenth-century scholar from Tunis, whose work is more often alluded to than read.

Ibn Khaldun was a polymath and has been seen as anticipating the theories of Charles Darwin and Karl Marx, among others. He was certainly a great inspiration to Arnold Toynbee (1889–1975), but has also been an influence on the science fiction of Isaac Asimov and Frank Herbert, and the subject of one novel, The Polymath, by the Moroccan Bensalem Himmich. His meeting with Tamerlane in Damascus in 1400 is the theme of a play by the Syrian, Sa’dallah Wannous.

Robert Irwin takes us through the life – or what is known of it – of Ibn Khaldun, describing a fluid, political world of Mamluk Egypt, North Africa and Nasrid Andalusia. Scholars and lawyers moved easily from one area of this Islamic world to another. Ibn Khaldun was a courtier and a lawyer and, in his middle age, withdrew to write his “universal history”, al-Muqaddima, translated by his standard English translator as Prolegomena. He links all the writings to the circumstances of Ibn Khaldun’s life and the wider political world.

Ibn Khaldun was not quite the revolutionary modern-minded thinker of his reputation. He has a pessimistic view of life, stimulated by the ruins of North Africa of a former civilisation, once powerful but by his time not even a memory. His personal beliefs were rooted in the Maliki doctrines of Islam. He had an idea that civilisation had an in-built obsolescence of four generations and that renewal came from the nomads whose lifestyle of hardship and rigour produced qualities of nobility – anticipating modern writers such as Wilfred Thesiger and Bruce Chatwin. By contrast, luxury led to weakness, decadence and disintegration.

All aspects (and myths) about Ibn Khaldun are explored, including his relationship with nomads and with Berbers, and his alleged Sufism. Robert Irwin is respectful but not overawed by his subject, and is ready to state where Ibn Khaldun simply got things wrong.

His longest chapter is about what he calls the “strange afterlife”. His fame was not recognised in the Arab world in the first centuries after he died. He was however taken up by Ottoman Turks, who, anticipating their own decline from the early seventeenth century, found solace and explanations in Ibn Khaldun’s ideas. Early modern western scholars of Arabic such as the Frenchman Silvestre de Sacy and the Austrian Joseph von Hammer-Purgstall, “discovered” him and the first translations into French were the usual channel of European access to his work. The twentieth century has seen more critical editions, into English by Franz Rosenthal, and into French, by Abdesselam Cheddadi. It is strange that there is not yet a critical edition in Arabic by an Arab scholar.

It appears that everyone can have his own Ibn Khaldun – Marxist, liberal, conservative, Islamist. He can be the father of sociology and the precursor of universal histories, but Robert Irwin is careful not to make too many claims. Ibn Khaldun was a highly intelligent man of his times, believing in the importance of dreams and with some “weird” ideas of science. His large literary output has perhaps allowed readers to find many messages.

Robert Irwin writes with authority, and his book is a delight to read. He is an admirable guide to other leading observers of humanity who preceded Ibn Khaldun, such as al-Mas’udi whom Ibn Khaldun admired immensely and called “the imam of the historians”. Though Robert Irwin can be easily distracted by entertaining philological oddities and a good story, this just adds to the pleasure, as well as the intellectual profit, for the reader.

Published in Banipal 62 – A Literary Journey through Arab Cinema