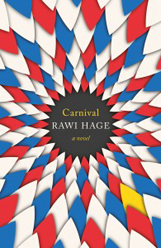 Towers of books and a flying carpet

In a series of short videos made at the Edinburgh International Book Festival in August, authors were asked to name their favourite word. The Lebanese-Canadian novelist Rawi Hage said: “My favourite word is ephemeral – because life is ephemeral.”

A sense of ephemerality pervades Hage’s third novel Carnival, which was recently published by Hamish Hamilton in the UK (it was first published in Canada last year by House of Anansi Press).

Hage’s first-person protagonist, Fly, is an immigrant taxi driver who roams the streets of an unnamed city in his cab. The novel is set at the time of the annual carnival, and revellers crowd the streets in masks and costumes. Fly is an engaging, entertaining and erudite narrator. His taxi is “my boat, or sometimes my airplane, my home, or my library”. Fly divides taxi drivers into two groups: Spiders and Flies. Spiders wait for custom at taxi stands, while Flies, including Fly himself, are “wanderers, operators who drive alone and around to pick up the wavers and the whistlers on edges of sidewalks and street”.

Hage was born in Beirut in 1964 and grew up in Lebanon and Cyprus. He moved to New York in 1984, and then to Canada where he studied photography. He is based in Montreal, but is currently writer in residence at Vancouver Public Library.

When Hage’s debut novel De Niro’s Game appeared in 2006 he was quickly recognised as a major new literary talent. The novel won the International IMPAC Dublin Literary Award, the Paragraphe Hugh MacLennan Prize for Fiction and the McAuslan First Book Prize. Hage’s second novel Cockroach (2008) also won the Paragraphe Hugh MacLennan Prize. So did Carnival, which was in addition a finalist for the Rogers Writers’ Trust Fiction Prize.

Carnival has a large cast of characters, around 50 in all. They include circus performers, hustlers, prostitutes, drug dealers, doctors, professors and students. Fly is often drawn into their dramas: on one occasion a wealthy passenger invites him to accompany him to an S&M bondage club, leaving the taxi meter running. Fly observes the goings on but does not partake in what is on offer.

A main pleasure of Carnival is Hage’s exhilarating use of language and his abundant skill as a storyteller. The novel has a loose, freewheeling style, flitting widely through time and space. Reflecting the narrative’s theatricality it is split into five acts which are divided into numerous scenes, each with a one-word heading.

Fly was born in a circus to a trapeze artist mother and a bearded father who travelled with his camel “from beyond the dunes” and has a flying carpet show. Fly grows up to be “a knower and a guesser in the world of tents”, known as the Surmise Child. He would guess a person’s weight, age and so on; this is how he became an acute people-watcher.

Fly’s father falls under the influence of another bearded man and becomes a believer “who considered carpets were to be pinned to the earth”. He leaves the circus, abandoning his wife and child. “After his departure, none of his carpets would stay on the ground. They swirled around the tents like little hummingbirds.” Distraught at the loss of her man, Fly’s mother hangs herself and the circus’s bearded lady takes young Fly into her care. Perhaps the experience of losing his father to religion is one reason for Fly’s vehement anti-religiosity.

“What else is there to do when you have a free spirit and you are confined to a small world of jailers and walls?” Fly replies. He sees the act as a way of breaking the jailer’s keys and chains. The apartment building where he lives “hums with strange people, rodents and insects who come and go as they please” and his own apartment is crammed with towers of books stretching in all directions and arranged according to an idiosyncratic, ever mutating system. Carnival is in part a novel on reading and books, and it has numerous allusions to titles and authors. One of the book’s epigraphs is a quote from Mikhail Bakhtin’s Rabelais and His World. It is Bakhtin who coined the term carnivalesque and developed the theory of literary carnival.

Fly was given his books by a professor friend. He teasingly says the professor was called Alberto Manuel – which happens to be just one letter short of the name of the Argentine-born Canadian bibliophile Alberto Manguel, author of such works as A History of Reading and The Library at Night.

Despite Fly’s frequent tirades against religion he has much tenderness for his next-door neighbour Zainab, a young woman with a degree in Islamic studies. Zainab is a “librarian type with molten lava inside that could burst in your face, ignite you, and deform you into an anatomical wonder”. She seems austere but “I know that behind it all there is a riddle that has to be cracked”. Zainab is no religious hardliner. She drinks alcohol and opposes the literal interpretation of religious texts. It is not until late in the novel that she reveals to Fly the secret of why she had to flee Jordan.

Fly’s exchanges with Zainab are playful and light. In one he declares: “But Zainab, darling, God is dead! The other day I killed him myself. I hit him with my cab while he was crossing the street on a red light. I say he should have known better, him being God and all . . .” One night Fly raids a backyard and presents its potted flowers to Zainab. She is “ecstatic, smelling them and laughing”. But when Fly suggests they get naked between the branches and play “doctor and Bible games” her answer is: “Absolutely not.”

Fly does have sexual relations with book-lover Mary, whose husband he throws out of his cab when he bullies Mary over her books and reading. Fly takes Mary back to his apartment and reads to her from Czech writer Bohumil Hrabal’s Too Loud a Solitude.

Fly’s closest male friend Otto is a radical activist who takes Fly to live with him and his lover Aisha after the bearded lady dies. Otto and Aisha also take in Tammar, the neglected young son of a drug addicted prostitute. But Tammar returns to live with his mother and her pimp and grows up to be damaged and dangerous. He teams up with a similarly maladjusted accomplice.

After Aisha dies Otto begins a disastrous decline. He is arrested at a big march of leftists and unionists he has helped organise and is incarcerated in a psychiatric hospital and forced to take medication which turns him into a wreck. At one point Otto dresses in a clown’s costume and, with the help of Fly disguised as an Irish elf, holds his psychiatrist up at gunpoint and forces him to read “A Poem Some People Will Have to Understand” by the African-American poet Amiri Baraka, formerly known as LeRoi Jones. Fly gets him to inflict similar punishment on Mary’s book-hating husband, whom Otto forces to read from James Joyce’s notoriously difficult Finnegan’s Wake.

The novel darkens towards its end. A spate of gruesome murders fills the city with speculation and terror. Fly has previously had fun satirising the Spider-type taxi drivers, but taxi drivers are now among the victims of homicide. The perpetrators of at least some of the killings call themselves The Savage Capitalists, a likely nod to Roberto Bolano’s The Savage Detectives. In the dying hours of the Carnival, Fly’s father’s flying carpet may offer a form of escape.