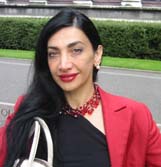 A Red Cherry on a White-tiled Floor: Selected Poems

How foolish:
Whenever my heart
hears a knocking
it opens its doors.

A Red Cherry on a White-tiled Floor: Selected Poems is Maram al-Massri’s first collection to be published in English. It comprises selections drawn from two of her three previous works: A Red Cherry on a White-tiled Floor, (1997) and I Look to You, (2000), the first of which was awarded Le prix du Forum culturel libanais en France in 1998. That prize-winning book has already been translated into French, Spanish, and Corsican, with individual poems having appeared additionally in German, Italian, Turkish, and in English (in Banipal issue No 4, Spring 1999). The current volume finally makes a substantial selection of al-Massri’s poetry available to anglophone readers.

Born in Syria, al-Massri has lived in France since 1982. From her first book (I Threaten You With A White Dove, 1984), she has possessed a distinct voice: lucid, spare and without affect. Her direct, unadorned writing, with its emphasis on the quotidian, and its utilization of simple, almost child-like metaphors, contrasts sharply with the conventions of traditional Arabic love poetry. That a woman write so unreservedly about sex also surprises, and this sense of surprise lends a fresh, unexpected quality to al-Massri’s work.

He felt no shame before her
in his old cotton clothes
and his torn socks.
He undressed,
the way the need for love
strips naked,
and descended
like an angel
upon her body.

The poems themselves – brief, intense lyrics – tend to focus tightly on a single thought, idea, or action, explored through the prism of the poet’s emotion. With their fragment-like form and amorous content they strongly recall the poetry of Sappho, with which they occasionally seem to dialogue. (i.e. Sappho’s “Pain penetrates // Me drop / by drop”, which resonates in al-Massri’s ironic “The serpent will die / when / it bites me / and tastes / my pain.”, or the former’s “If you come // I shall put out / new pillows for / you to rest on” , which is evoked by the latter’s sensual and satirical “Come naked / that I may dress you again / with your body / which my imagination / has borrowed.”, to give just two examples.)

As the few poems quoted here make plain, al-Massri’s subject of predilection is indeed love, and she explores this topos relentlessly. Not so much the joy or pleasure of love, though there is that too, albeit in isolated, fleeting moments. Rather, her focal point is the deception of love, and the emotion that most fuels her writing is the overwhelming disappointment that ultimately the loved one, if not love itself, is unable to satisfy her. This realization does not thwart her desire, nor does it discourage her from allowing herself to believe (and be disappointed) yet again, qualities that prompted one critic to see in her work a heightened form of Bovarysm.

She asked him
for a dream
and he offered her a reality.
Since then
she found herself
a bereaved mother.

Like much love poetry, al-Massri’s poems are frequently dialectical, their dynamic hinging on the juxtaposition of an “I” (the poet) and a “you” (the loved one). In some of her most touching pieces, however, the dialectic functions solely in reference to herself: on the one hand her physical self that longs and feels, and on the other her mental self, aware of its shortcomings and the prospect of failure. Here too the dominant tone is one of sadness at the inevitable deception of love.

I looked into my mirror
and saw
a woman
filled with contentment
and with bright eyes
and delicious mischief,

and I envied her.

In addition to offering a new perspective on the possibilities of love poetry, these carefully wrought poems reveal a distinct preoccupation with poetic form and linguistic refinement, suggesting, as many readers and critics have pointed out, that the “how” of the work is as important as the “what.” Commenting on this, Tunisian critic Jalel el Gharbi remarked that “What is important here is not so much desire itself, as the voice that proclaims it. It’s not about reveling in desire, but in the language that expresses it . . . Language is the subject of this work, and love is a detour to say what is lacking, to speak of absence and distance.” This observation brings to mind the 16th-century French poet Louise Labé who, like Sappho, can be seen as a spiritual ancestor of al-Massri. “After love,” Labé once wrote, “the greatest pleasure is talking about love.”