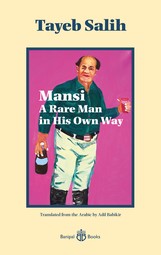 For the Paperback via PayPal.
Choose your postal region from the list below
and click on the PayPal button.

Read the review in Qantara here

Tayeb Salih is internationally known for his classic novel Season of Migration to the North. With humour, wit and erudite poetic insights, Salih shows another side in this affectionate memoir of his exuberant and irrepressible friend Mansi Yousif Bastawrous, sometimes known as Michael Joseph and sometimes as Ahmed Mansi Yousif.

Adil Babikir, Sudanese like Salih, has written an introduction to the memoir, as well as producing a fine translation that retains the freshness and flavour of the original and aims to share glimpses of that beauty with the English reader. On 20 December 2020, the 2020 Sheikh Hamad Award for Translation and International Understanding announced that Adil Babikir jointly won the Award's third prize for his translation of Mansi A Rare Man in His Own Way – the other third prize winner being Jonathan Wright for his translation of Sinan Antoon's The Book of Collateral Damage.

Though he was no person of note, Tayeb Salih said of Mansi: “He was important in the eyes of a few, including myself, who accepted him as he was and loved him regardless. He was a man who had traversed life’s short journey in leaps and bounds, occupied more space than had been allocated for him, and caused quite a clamour within the realm of his existence.”

"This is a flavourful and entertaining memoir of Salih’s friendship with a shape-shifting, rule-breaking character who treated life as an “endless laugh”. His picaresque portrait of the Egyptian-born writer, actor, teacher and adventurer known as “Mansi” abounds in high spirits, tall stories, character sketches and outlandish plot-twists." Boyd Tonkin

“Part of the allure of Salih’s non-fiction comes from his skilful employment of fiction-writing techniques. But it is also derived from rich references to Arabic classic literature, which are seamlessly woven into the fabric of his texts. Drawing on an almost inexhaustible repertoire, Salih adeptly uses historical anecdotes, philosophical reflections, and poetry to add depth and eloquence to the memoir.” Adil Babikir

Tayeb Salih (1929–2009) is renowned as one of the 20th-century’s greatest authors, particularly for his novel Season of Migration to the North, translated into English by his friend Denys Johnson-Davies, which was declared ‘the most important Arabic novel of the 20th century’ by the Arab Literary Academy in 2001. It remains a pivotal point in post-colonial narrative and has been translated into more than 20 languages. It has never been out of print in English, in a number of different editions. Tayeb Salih was born in Karmakol, near al-Dabbah in northern Sudan. His other works include The Doum Tree of Wad Hamid, The Wedding of Zein, A Handful of Dates and Bandarshah, all translated by Denys Johnson-Davies. For 10 years, he also wrote a weekly column for the London-based Al-Majalla magazine.

Translator: Adil Babikir is a Sudanese translator and writer, based in the UAE. His translations include Modern Sudanese Poetry (2019); The Jungo: Stakes of the Earth by Abdelaziz Baraka Sakin (2015); Literary Sudans: an Anthology of Literature from Sudan and South Sudan (2016).