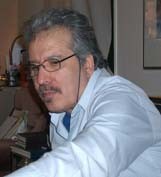 This is what my father wrote in the last letter I received from him: “I know that your desire to come home must be great, but I fear what would happen to you if you did. Find a safe place to live, my son, until God decides to grant us some mercy.”

It was evening when I entered Prague’s central station. I put my bag in the luggage store and headed towards the station hospoda. This was before the fall of the Berlin Wall and the Velvet Revolution when most stations had only one restaurant. The food they served was not fast. No one was in a particular hurry in those days.

I needed a drink to cope with the journey ahead. I settled on an isolated table next to the wall. When the waiter arrived, I asked for Kyrgyz cognac with chilled soda water. I began to compose a letter to my father as I waited for the drink: “Dear Dad, there is a good chance that I might be granted political asylum in Austria . . .”

“What are you writing?”

I raised my head to see an old man, somewhat inebriated, sitting opposite me with a glass of Staropramen beer, half empty, in front of him. I had no idea how long he’d been there. I decided to ignore him.

He gave a gentle smile: “Sorry. I don’t mean to pry. That script you are scrawling, from right to left, it made me curious.”

I twisted my neck left and right, right and left, then resumed writing in silence.

He asked: “Are you Arabian?”

I stared at him somewhat angrily and lied: “No.”

“But you are foreign.”

He looked at me with a smile that reddened his wrinkled face then asked: “Where are you from?”

I thought the best way to quickly end the conversation was to invent a fake country,“Biryani”.

Biryani was the name of my favourite Iraqi dish. Actually, the rice and meat dish with its highly distinctive spicy aroma probably originated in Persia, but its luxurious sounding name was sufficient to conjure up images of Baghdad for me. I also chose this familiar word so that if he inquired again where I was from, I would be unlikely to forget. He looked puzzled by my reply and asked me to write the name down. I wrote it in Czech on the back of my cigarette pack and shoved it towards him. He took a pair of reading glasses from the inner pocket of his worn-out jacket and put them on. The glasses straddled the bridge of his considerable nose. He read out the letters of the word one by one: “B..R..J..A..N..I”. Then, like a man who has just remembered a fact he had known all along, he said: “Oh, yes, Brjani, of course!” He took off his reading glasses and folded them gently before placing them back in his pocket.

“God, I’m such an idiot. Why didn’t I recognise Brjani straight away? Joseph has been there twice.”

And thus it was through Brjani that the old man started to talk about the subject closest to his heart:

“Joseph is my friend. Actually, he is my best friend. He’s ten years older than me, although he looks younger. I’m 79 but I’ve yet to lose my optimism. I love mixing with people, I trust them. Maybe it’s because I’m still a country boy at heart. Born in the same town as Joseph. Netolice, have you heard of it? My dad died there sixty years ago. Mum followed him a month later. So I moved to Brno, then Prague; in fact, I lived in many different cities because I was training to be a fighter pilot. I married a lovely girl, Yarmila. We had two boys and a girl. I haven’t seen Joseph since I left Netolice. But I’ve started seeing him in my dreams. He speaks to me in his usual soft manner: ‘Martin, I’m sorry your dear wife Yarmila died . . . leave the old people’s home and come and live with me. You can share my flat. We’ll live on bread and wine and recollections of past glories.’ So you see, that’s why I’m here at the train station. I’m going to see him, I’m going to see Joseph, at long last. I’m returning to the place where I was born. I’ll live like a king amongst my old friends and relatives. How incredible it’ll be when I set eyes on Joseph again! I know he’ll want to take me fishing like he used to when we were boys. And swim naked in the lake and gather wild mushrooms from the forests. Oh, Joseph is a maniac for gathering mushrooms, just loves it. He’s also crazy about women. He used to call me every time he fell in love. Once, oh, this must’ve been a good five years ago, he called and told me about this incredible gypsy he’d fallen for. He asked me: ‘Why does the body age while the soul carries on feeling young?’ You know that might very well have been the last time we spoke. Huh, he’s going to get the shock of his life when I turn up, in the flesh, after sixty years, ‘like a genie’ as you would say in your country. No one understands me, loves me or forgives my mistakes the way he does. To be honest, no one can stand me like him, either, no one . . . ah, Joseph, Joseph, Joseph.”

By this point, I was on my third glass of cognac, ready to order the fourth. He finished his beer and stopped talking. Should I ask him some more about his childhood, his home town, his Joseph? He would love to talk about the past. But before I had a chance to ask a question, he began to look at his wristwatch.

“Time to board the train.”

He paid his bill, and held onto the edges of the table as he got up. He shook my hand then suddenly kissed the top of my head. I watched him walk out of the restaurant, swaying this way and that. I thought: “What would he do if he finds out Joseph is dead?” That might be a better outcome than if Joseph were still alive but received him coldly. The poor bastard would die of disappointment. I swallowed the remainder of my cognac and thought how woeful we all are. The righteous and the sinners are woeful, this lady in front of me who is yawning right now is woeful and so is that man blowing his nose into his hanky. And I’m no exception. Each one of us is created in an instant of pleasure and then we spend our lives searching for bread and shelter and kindness, searching for some kind of unattainable justice.

The voice of the announcer came over the tannoy like a thunderclap. My train was due to depart. I called the waiter to settle my bill. As I placed the golden coins in his thin silver tray I said to him: “There is no justice except in Brjani.”

He looked at my empty glass of cognac then asked in a sarcastic tone: “Really? And where does sir hail from?”

I remembered the old man and smiled: “Baghdad.”

I nearly added: “I can’t go back there.” But clouds began to gather dangerously behind my eyelids, threatening rain, and I remained silent.

On the way to the platform, I thought of a line with which to end the letter I had been composing to my father. I shed a tear, thinking it would drown the universe, but all it did was wet my cheek. It sounded like the sort of poetry my dad enjoyed reciting, but I feared that coming from his own son, it would fill him with pointless sadness.

The train shook violently, then began to move. I was lulled to sleep as if I were once more a child in my mother’s arms. I called out to my childhood friends: “Jasim, Hammada, Sulaiman, come on, let’s play trains.” They all gathered behind me. They held onto each other and onto me as we set off in unison, like the wheels of a steam train.

I opened my eyes. The border guard was standing over me. I handed him my passport. He flicked though it and then asked: “Where to?”

He stamped the battered document and returned it to me. The train resumed its lullaby.

With the sleeve of my coat I wiped away the mist that had accumulated on the window. I looked out and immediately had to put my hand to my mouth to stop myself from screaming. We were passing through Baghdad. The train came to a halt and there on the platform, I saw my dad. How long had he been waiting? Next to him was Martin, the old man I had met in the station restaurant. My dad was nudging him and saying: “Our boy is on that train.”

Back to Selections from Banipal 49 - A Cornucopia of Short Stories