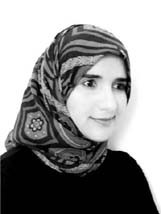 The wedding hall is huge and the bridal throne is decorated with countless flowers and white and pink curtains. Women are sitting proudly in circles round the tables. Saloma is sitting on her chair with a straight back, her head neither raised nor inclined. Her hands, heavy with gold and silver rings, bracelets and beads, are placed on her lap. Her feet, with their anklets are rooted to the ground. On her lips, a vague smile, as if of contentment and blessing. Her eyes are directed languidly in a straight line, barely blinking, at the bride. During the wedding, which stretched to more than two hours, Saloma never left her seat, never lifted a limb, never changed her contented smile or her confident posture, it was as if she had been born to sit in that chair, as if she had not lived anywhere but in this hall, as if Saloma had existed since eternity; her existence seemed as endless as it always would be.

Saloma, who had been married at least ten times, never had a wedding like this. She had never sat on a bridal throne with swinging curtains. It had never occurred to any of her grooms to sit next to her and hold her hand in front of everybody else. Every time she was married, she was covered from head to toe with a heavy veil. The veil was always embroidered with gold thread, or sometimes simply plain green, depending on how rich the groom was. Her body would be squeezed between the bodies of singing, buzzing women. She would be taken directly from her house to his, where there would be a small rug in a corner of the house. She would sit on it, unable to breathe because of the weight of her green veil. Women would sit round her in circles on the floor in front of plates of sweet halwa1 and jugs of bitter coffee. As soon as the men's procession appeared, the women would get ready to leave the house and the bride and groom would be left alone. Only he would look at her sultry eyes, look at the storm of bracelets, necklaces, amulets, silver, gold and coloured plastic armlets, under which Saloma never faltered.

On this night, on this chair made especially for her, Saloma shines. Her eyes are sultrily loose, either spontaneously or deliberately, and fixed on the bride. Her bejewelled ikfa2 hairstyle shows the size of her braids under the embroidered veil. Her gold nose-stud, shaped like a flower, is an inseparable part of her nose. And her confidence . . . Aah, her confidence. There is no doubt that her nine chickens are asleep now. She cleaned their nests and collected the eggs early in the morning. She gave them her lunch leftovers before preparing for the wedding. Then she boarded the guests' bus that went directly to the wedding hall at the Omani Women's Society in Muscat.

Her faint smile does not leave her face and only a small number of wrinkles show around her mouth. No . . . no! There is no sarcasm in this smile, only contentment and blessing. She earned several rials from selling fresh eggs, and the dishdasha she is wearing is the only gift from her daughter who visits her once every Eid. Her daughter's father was her fourth husband. For months, he pursued Saloma, bewitched by her walk, through the suburbs, the falajs3, and narrow alleys until she agreed to marry him. He left his town and his wife to live with her.

The food is distributed and the forks, plates and knives are put on the table. The grilled meat, cakes and pastries are distributed around the tables but Saloma does not give them a glance. She stays motionless with a straight back, her relaxed look fixed on the bride and the natural rose bouquet she is holding. Only when she is invited does Saloma start to eat with the fork as if she has used one all her life. She chooses to drink Shani which leaves a crimson colour on her lips. Whenever she moves her hand up or down, her bracelets tinkle and the silver 'adid4, hidden under the sleeves of her dishdasha, release that musical sound which has a long history of captivating men's minds.

We wink at each other and laugh, asking: "Well, Saloma, what about your daughter's father, why did he, too, leave you?" She straightens her back and places her hands akimbo, her eyes flickering, but before she can say anything we cry: "Jinx!"

She smiles cheerfully and pats her thigh, affirming what we have just said, and remarks: "Yes, by God, it was a jinx. Every day I found hair, bones and black threads buried in front of my house. Why are they jealous of me? No idea! I am a sick lonely woman." We said straight back: "No, no, there is nobody healthier than you. Although you are over sixty, your bewitching walk triggers a flirtatious cat-call from here and an admiring "awww" from there." Her face becomes radiant as, pleased with our claims, she reassures us that she still receives proposals of marriage. But Saloma rejects them all because they are from old men who are good for nothing except complaining.

Saloma wipes her mouth with a napkin. The women around her start to smarten up. Pocket mirrors are taken out of handbags, eyebrows re-brushed, lips repainted, faces re-powdered, tresses of hair tidied back once more. Saloma, whose forehead has been smeared with saffron water, does not have a handbag as she has never needed one. She pays no attention to the handbag-women around her. Her eyes are fixed on the bride in front of the cameras.

The women began to dance in circles. Each circle expands to the words of the songs, songs that contain some Swahili words. Saloma does not understand Swahili, though one of her husbands spoke it very well. That marriage did not last for more than a few months. When Saloma meets with women in the afternoon, she enjoys imitating that husband. She will suddenly stretch out on her back, cross her legs, and speak loudly, imitating his hoarse voice: "No, by God! I never felt as comfortable with any other woman as with you, Saloma! You are bliss. You are a gift. Where have you been all these years? Aah, take the mandoos5, take the donkey, take the date palms and stay with me. Where were you before, woman?" At that point Saloma sits back up, and starts laughing: "As soon as I gave birth to my son, he left, taking with him the mandoos, the donkey and palm trees. Jinx! Whenever he came home and I was not there, the evil-eyed women would tell him: "She is with her lovers." Resounding lies! They were jealous of me. Why? I don't know, I am just a lonely sick woman." She smiles, winking.

We do not hesitate to chorus: "You are in good health and you are not alone. Your son is out of prison now, he will get married and you will live to see his children."

Does the picture of her future grandchildren pass through her mind now, with the dazzling, dancing lights and loud music? Does she wonder how they will look? Like her handsome son, who is the spitting image of his father, or will they resemble their mother, who will probably be an Indian6 to cut down on the wedding expenses? She could never afford such a wedding for her son, not even a traditional one. He will marry quietly and she will see his children. As for her other son, whom she has not seen in years, he may not have been spared by God. He left the same day his father left her, her seventh husband, who married her in the year of drought.

The women come back from the dance floor and collapse in their chairs. The bride fidgets restlessly and looks at the door. The songs and voices start to fade away. Some guests begin to leave. Saloma stays comfortably on her chair with her flawlessly contented smile. Her neighbour whispers that the bus is leaving, and only then does she stand up swiftly, as if she never suffered from back pain. She walks up to the bridal throne and places her hand on the head of the bride, who inclines it afraid of spoiling her expensive hairstyle. Saloma mutters the Fatiha7, and then walks - the same walk that made her a bride ten times over - amongst the guests and then leaves the wedding hall for the bus stop.

1 An Omani sweet made of sugar, nuts, and cardamom.

2 A traditional Omani hairstyle in which the hair is divided into two parts and perfumed with herbal plants like camphor, myrtle or flowers mixed with dates, musk and sesame oil.

4 An Omani traditional accessory that is worn on the upper arm.

5 A traditional Omani box in which clothes and other effects are put, something like a cupboard but with traditional importance.

6 The dowry a bridegroom has to pay to an Indian wife's family is far cheaper than that to an Omani wife's family.

7 The first sura of the Qur'an.

Check out  all selections from Banipal 35