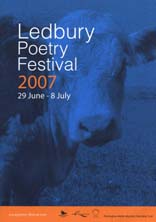 Abdo Wazen is a major poet and cultural editor of the international daily Al-Hayat. Bassam Hajjar is one of the best poets of his generation and this is his first English performance. Zeinab Assaf is a new, young and very talented modern poet and this will be her first UK appearance.

It was very unfortunate that owing to security concerns in both Beirut and London, which everyone fully understands, Bassam Hajjar was unable to make the trip to the UK. However, with poems ready translated and the poet Stephen Watts ready to read, the event began with Bassam's poems read in Arabic by Banipal's assistant editor Samuel Shimon. 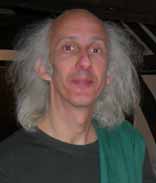 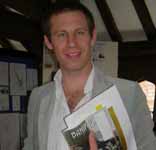 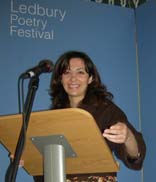 As audience members made their way into the hall, a Powerpoint projection showed pictures of the poets and gave some information about the Lebanese poetry scene. The hall was packed and the audience asked for more poems to be read in Arabic.

The question and answer session at the end was non-stop, and many audience members queued for the two poets Abdo and Zeinab to sign copies of Banipal 28 which contained their poems in translation.

• A remarkable historical place to visit was Ledbury's oak-panelled Marriage Room, said to be the place where W H Auden married the daughter of Thomas Mann, to save her from falling into the hands of the Nazis. 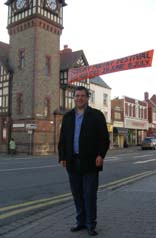 • Abdo Wazen in Ledbury High Street, in front of the Clocktower 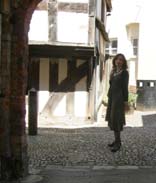 • Zeinab and Margaret in historic Ledbury 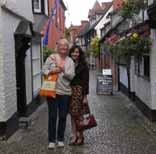 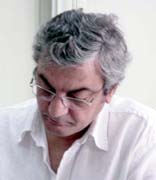 This event is a partnership of Ledbury Poetry Festival and Banipal. 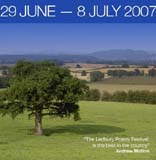 The visit of the poets to the UK was made possible by the collaboration and support of Banipal, Decibel, Literature Across Frontiers, Xanadu* Gallery & the British Council for Arts