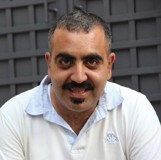 Eyad Barghuthy was born in Nazareth in 1980. He graduated from the Baptist High School there, then studied sociology and political science at Tel Aviv University. In 2006, he published a collection of short stories called ‘Nuduuj’ (‘Maturity’). His short story collection ‘Bayn Al-Buyuut’ (‘Among the houses’) was awarded a young writer’s motivation award by the A. M. Qattan Foundation in Ramallah in 2008 and was published by Dar Malaamih Publishers (Cairo/Beirut) in 2011.

In 2009, his tale 'Al-Samma‘ah’ (‘The Headset’) was awarded a prize in the ‘Sea of Words’ short story competition (Anna Lindh Foundation and European Institute of the Mediterranean). Barghuthy has also written four plays and the script for a short film. He is editor for the weekly Fasl Al-Maqaal journal and Project Director for the Arab Cultural Association in Nazareth. He lives in Acre.

NB: Eyad Barghuthy's short story "A Fateful Meal", published in Banipal 45 – Writers from Palestine will be discussed at the V&A's 30 November Friday Late: Record, Reframe, Resis, which will be hosted by the Banipal Book Club. Click here for more details of the event. The story was selected and translated for Banipal 45 from the author’s latest short story collection Bayna al-Buyut (Between the Houses), published by Dar Malaamih (Cairo–Beirut), 2011.