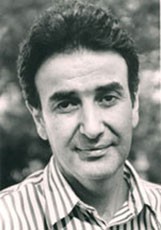 Lawrence Joseph’s Lebanese and Syrian grandparents were among the first Arab emigrants to Detroit almost a hundred years ago. He is the author of five books of poems, most recently Into It and Codes, Precepts, Biases, and Taboos: Poems 1973-1993, both published in 2005 by Farrar, Straus and Giroux. Originally from Detroit, he has, since1981, lived in New York City, where he is professor of law at St. John’s University School of Law.