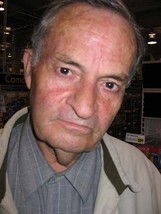 Noel Abdulahad was born in Bethlehem, and settled in Phoenix, Arizona. He was a poet, critic and translator from Arabic, and particularly enjoyed translating poetry. He was immensely supportive of Banipal, working enthusiastically on translating poets for the early issues of the magazine, from Syria, Morocco and Jordan. He would write everything out by hand and fax it over, then ring to make sure it had all arrived safely and could be read clearly. He always had time for a chat on literary matters.His Arabic translation of Gibran’s The Prophet is well known, and in the late 1990s he was a member of the International Advisory Board for the First International Conference on Gibran Kahlil Gibran, The Poet of the Culture of Peace, that was held 9–12 December 1999 at the University of Maryland, USA.

He translated for a number of other journals and anthologies internationally and in the USA, including for Post-Gibran: an Anthology of Arab-American Writing.

He died on Sunday, 28 October 2007 after a long struggle with cirrhosis of the liver and lived his last months at a friend's house in Phoenix to be cared for. He was not married and had no relatives in USA, and is buried in Bethlehem, Palestine, next to his parents. He was 68.