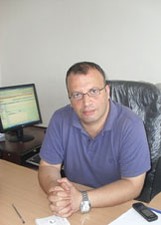 was born in 1969 in Algiers.  He started writing in the mid-1980s.  He published collections of short stories in 1992 and 1995 and then his first novel (Ceremonies and Funerals) in 1998 – excerpted in Banipal 7, in translation by Hassan Hilmy.

Some of his works have been translated into French. He often writes articles in the Arabic press and works in Algerian television as assistant producer of the cultural programme 'Maqamat'.