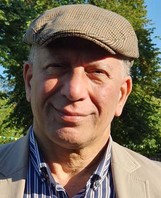 His published works include several collections of poetry, including Faradees wa Aya’el (Al Mada, Damascus, 1998), with translations into languages that include Polish, English, French, German, Spanish and Russian. He has one English collection of selected poems, Questions and their Retinue, translated by Khaled Mattawa (Arkansas University Press, 1996).

He is a principal translator into Arabic of Polish literature, including by Adam Mickiewicz, Czeslaw Miłosz, Wislawa Szymborska, Juliusz Słowacki, Zbigniew Herbert.