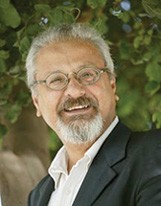 Charbel Dagher is a professor at the University of Balamand in Lebanon. He graduated from New Sorbonne University in Paris and holds two PhDs, one in Modern Arabic Letters and one in Aesthetics of Arts.

Charbel Dagher is considered an innovator of the prose poetry and has published more than forty books, in Arabic and French, among which novels, collections of poetry and books on Islamic and Modern Art.  His poems have been translated into several languages, including English, French, German, Italian and Japanese.