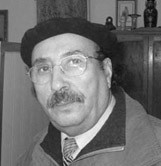 was born in 1936 in Algeria. After his first collection of short stories in 1965, he published two plays, three volumes of short stories and twelve novels. The Earthquake was his first novel published in English translation by William Granara, and excerpted in Banipal No 7's feature on contemporary Algerian literature.

Considered the father of the Algerian novel, Taher Wattar passed away on the evening of Thursday 12 August 2010. He had been confined to bed for almost two years by an incurable cancer and died at his home in Algiers, just three days short of his 74th birthday. Some of his twelve novels were translated into a number of languages.

He was born in the Algerian countryside to a Berber family in 1936. His mother had lost three children before he was born, and he went on to become the rather indulged son of a large family. He entered the Jami’a al-Ulamaa’ school in 1950 and was then sent by his father in 1952 to study Islamic jurisprudence at the Ben Badis Institute in Constantine. While there, he became interested in literature as well as Islamic law and thought.

In the early 1950s, he made contact with schools in Egypt, through which he studied journalism and cinema. He went on to study for a short time in 1954 and, on his own initiative, at the Zaitouna University in Tunis.

“As a writer, Wattar was not the tranquil or steady sort. Put simply, he could be problematic like all great writers, given the great issues of life they raise in whatever medium. Whether in his novels, short stories, autobiographical sketches, theatre, political and philosophical articles or even in his daily conversations, Wattar was the very image of the cultured man, deeply enmeshed in the issues facing his nation. He was also heavily involved in the national liberation movement, like his whole generation, remaining convinced that the profound setbacks endured by Arab nationalism were only temporary and did not represent a fundamental reverse in fortunes.

“Wattar the novelist, however, was something even greater than all of this. His novels, from their beginnings through to the portrayal of the predicament of individuals, present the hidden tragedy of a whole social stratum betrayed just as the French bourgeoisie was. They also present the tragedies of writers, artists and political activists encountering a political system which has missed its appointment with history, and characters who encounter the new social classes and who have no stake in society other than profiteering, racketeering and the pursuit of narrow self-interest. His final work, however, returns to his earlier preoccupation with gambling which takes individuals prisoner, belittling them and absorbing their whole creative and artistic capacities. It was as if Wattar, whose pain in these final years could only be assuaged by morphine, was returning to the wellsprings of his early inspiration.”

This obituary was published in Banipal 39.