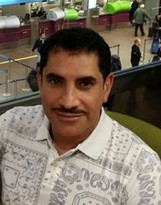 Younis al-Akhzami is a writer from Oman, born in 1968. He headed the Short Story Writers Association in Oman in 2006 and 2007 and was one of its founders.  He has been a judge on many local literary competitions for unpublished short stories and novels.