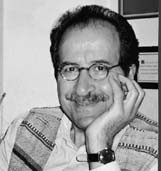 was born in Damascus in 1946, into an Aramaic-speaking family, and started writing at a young age. He is a storyteller in the traditions of the Levant, the Middle East and Hans Christian Andersen. His stories describe reality but he sees the magic as well as the irony of everyday life. His first piece was a satirical play about illiteracy and then, between 1965-70, he edited a “wall-paper”, Al-Muntalek, with friends.

In 1971 he emigrated to Germany, working in shops, restaurants and on building sites before graduating in Chemistry in 1979 and co-founding and editing the literary series Südwind, which published the works of immigrant writers.

He has received many distinguished awards both in Germany and elsewhere including the Hermann Hesse Prize (1994) and the Hans Erich Nossak Prize (1997); and earlier, the Mildred L. Batchelder Award (USA, 1991), the Smelik-Kiggen Prize (Netherlands, 1989), and the Prix de Lecture (France, 1996).

His numerous works in German include novels, plays, stories, essays and children’s books. Many, such as Damascus Nights (1995) and A Hand Full of Stars (1992), have been translated into Dutch, French, Japanese, Korean, Norwegian, Spanish, Swedish, Turkish and English. Since 2002 Rafik Schami has been a member of the Bavarian Academy of Fine Art.

One of his latest books is Die Dunkle Seite der Liebe [The Dark Side of Love], Hanser Verlag, München, 2004, which is excerpted in Banipal 31. The full English translation of this 900-page chronicle is due to be published by Haus Publishing. Haus Publishing have also published in English translation the book Schami wrote with his sister, entitled Damascus: Taste of a City (2005).