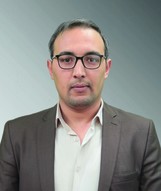 Abdelouahab Aissaoui is an Algerian novelist, born in Djelfa, Algeria, in 1985. He graduated in Electromechanical Engineering from Zayan Ashour University in Djelfa and works as a maintenance engineer.

In 2012, his first novel, Jacob’s Cinema, won the novel category of the President of the Republic Prize.

His second novel, Mountain of Death (2015), won the Assia Djebar Prize, regarded as Algeria’s most important prize for the novel.

His third novel Circles and Doors (2017) won the 2017 Kuwaiti Suad al-Sabah Novel Prize. Also in 2017, he won the Katara Novel Prize in the unpublished novel category, for Testament of the Deeds of the Forgotten Ones.

His fourth novel, The Spartan Court (2018) has won the International Prize for Arabic Fiction, one of the most prestigious and high value literary prizes in the Arab world.