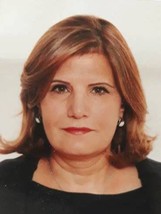 Kafa al-Zou’bi is a Jordanian writer, born in 1965. She has five novels, her third, Laila, the Snow and Ludmilla (2007) on the collapse of the Soviet Union and questions of Arab and Russian identity, came out in Russian in 2010. Her fourth Go Back Home, Khalil (2009) came out only in Russian. Cold White Sun,  her fifth novel, was shortlisted for the 2019 International Prize for Arabic Fiction and excerpted in Banipal 64 (Spring 2019). She writes for the Jordanian and Arab press and lives in Amman, Jordan.