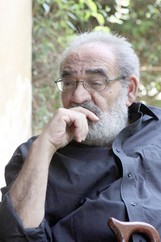 Alaa al-Deeb was an enormously influential author and critic, who died on 18 February 2016 at the age of 77. Born in Cairo, he studied law at Cairo University and after getting his degree immediately joined the Sabah El Kheir magazine. Until his last days he continued to write his weekly literary column of book reviews “Assir al-Kutub” (Juice of Books), which lasted for over 40 years, publishing first in Sabah El Kheir, then taking it to Al-‎Qahira magazine, and finally to Al-Masry Al-Youm newspaper.

He published his first collection of short stories, Al-Qahira (Cairo) in 1964, whose title novella was published separately a number of times.  He published four more collections of short stories, Sabah Al-Gomaa (Friday Morning, 1970), Al-Musafir Al-Abadi (The Immortal Traveller, 1999), Al-Sheikha and Al-Hosan Al-Agwaf (The Hollow Horse), as well as the film script for the famous film, The Mummy, directed by Shadi Abdel Salam.

Between 1964 and 1974 Alaa al-Deeb published many long stories and novellas; and since 1987 changed his style to what seems to be a different outlook on Egyptian society, writing five novellas Zahr el-Laymoon (Lemon Blossom, 1987), Children without Tears (1989), Moon over the Swamp (1993), Violet Eyes (1999) and Rosy Days (2002), in addition to his well-known memoir, Pause before the Decline: Papers of an Egyptian Intellectual. In 2002 he was awarded the State Merit Award in Literature.

Alaa al-Deeb was also a translator of literary and political works: his many literary translations include Samuel Beckett’s Endgame, Return to Brooklyn by Henry Miller and Sarkadi Imrie’s novella A Woman at Thirty.