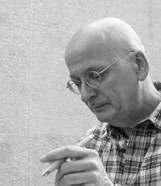 Roddy Doyle was born in Dublin in 1958. He is the acclaimed novelist, dramatist and screenwriter of eleven novels, two collections of stories, seven books for children, plays and screenplays, and memoir, following his debut novel The Commitments (1987), the first of a trilogy about the Rabbitte family in the fictitious suburb of Barrytown in Dublin. He won the UK's Booker Prize in 1993 for Paddy Clarke Ha Ha Ha. Several of his works have been turned into films.