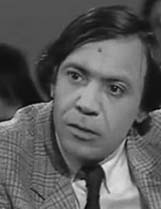 (1941–1995) is considered one of the most innovative of francophone Moroccan writers of the 20th century, sometimes called the Dylan Thomas of Morocco. Born and raised in Tafraout, southern Morocco, he joined the circle of writers known as the Amitiés littéraires et artistiques in Casablanca and was a co-founder of the Poésie toute movement. He lived in France for many years, and after 1979 between Morocco and France until his death in 1995 on Morocco’s Independence Day, November 18. Banipal 10/11 (2001) has a major feature on his work, with more poems from his Soleil arachnide collection.