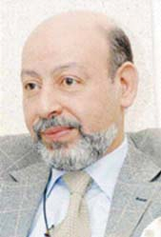 Waleed al-Rajeeb was born in Kuwait on 1st January, 1954. He obtained his BA in 1978 in Social Service from Helwan University in Egypt and, in 1985, received his Masters in Education from Western Michigan University. He has published numerous stories, poems and articles in Kuwaiti magazines and newspapers. From 1983 to 2013, he has published 5 collections of short stories. His first novel, Badriyya, was published in 1989 and, since then, he has published 4 more novels. He has also written several works on hypnosis and Reiki. Several of his stories have been translated into English and Polish. He received the Kuwait State Awards for Letters in 1997 for his short story collection Qumbar.