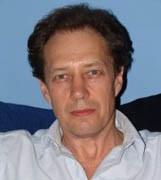 Jonathan Wright studied Arabic, Turkish and Islamic History at St. John's College, Oxford University. Between 1980 and 2009 he worked for Reuters news agency mainly in the Middle East,  and between 2008 and 2011 he was the managing editor of Arab Media and Society, an online academic journal of the American University in Cairo.

His first literary translation, from Egyptian colloquial dialect, was Khaled al-Khamissi’s Taxi (2009). He has translated a number of novels from Arabic to English: Hassan Blasim's short story collection The Madman of Freedom Square (Comma Press, 2009); The State of Egypt, a collection of essays and articles by Alaa el-Aswany (AUC Press, 2011); Judgement Day by Rasha al-Ameer (AUC Press, 2012); Life on Hold by Fahd al-Atiq (AUC Press, 2012); the Saif Ghobash Banipal Prizewinning Azazeel by Youssef Ziedan (Atlantic Books, 2012); The Iraqi Christ by Hassan Blasim (Comma Press, 2013); and Whatever Happened to the Egyptian Revolution by Galal Amin (AUC Press, 2013).

Other translations include Bahaa Abdelmegid's Temple Bar (AUC Press, 2014), Land of No Rain by Amjad Nasser (Bloomsbury Qatar Foundation Publishing, 2014) which was commended by the 2015 Saif Ghobash Banipal Prize for Arabic Literary Translation, and the 2013 winning title of the International Prize for Arabic Fiction The Bamboo Stalk by Saud Alsanousi (Bloomsbury Qatar Foundation Publishing, 2015).

At the beginning of 2017 he was announced as the winner of the 2016 Saif Ghobash Banipal Prize for his translation of the novel The Bamboo Stalk by Kuwait author Saud Alsanousi. For full details click here

He has also translated two novels whose Arabic originals were shortlisted for International Prize for Arabic Fiction (IPAF)– Hamour Ziada’s The Longing of the Dervish (2015 IPAF) and Ibrahim Essa’s The Televangelist (2013 IPAF).

His most recent translations are The Book of Collateral Damage by Sinan Antoon (Yale University Press, June 2020) and God 99 by Hassan Blasim (Comma Press, 2020).