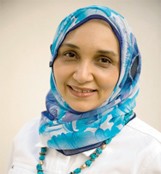 Leila Aboulela was born in 1964 in Cairo and grew up in Khartoum. She has a BA in Economics from Khartoum University and an MA in Statistics from the London School of Economics. She is the author of four novels, a collection of short stories and a number of radio plays. Several stories are published in anthologies and broadcast on radio.

She worked as a part-time research assistant while starting to write. She is the author of four novels: The Translator (1999), Minaret (2005), which tells the story of Najwa, an aristocratic Sudanese woman forced into exile in Britain, Lyrics Alley (2010), set in 1950s Sudan and inspired by the life of her poet and songwriter uncle, and The Kindness of Enemies (2015). Several short stories are published in anthologies and broadcast on radio, with “The Museum” winning the inaugural Caine Prize for African Writing in 2000. Her collection of short stories, Coloured Lights, was published in 2001. BBC Radio 4 broadcast a 5-part adaptation of The Translator in 2002, and a dramatization of “The Museum”. She has also had several radio plays broadcast, including The Mystic Life (2003) and The Lion of Chechnya (2005). She lives between Abu Dhabi and Aberdeen.

Her work has been translated into 11 languages.