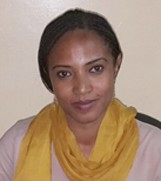 Rania Mamoun was born in 1979 in Wad Medani in east central Sudan, and graduated from the University of?Gezira. She has one collection of short stories, The Thirteen Months of Sunrise, the title story being published in translation in Banipal 30, and two novels Flash al-Akhdar (Green Flash), 2006, and Ibn Al-Shams (Son of the Sun), 2013. She was a member of the 2010 IPAF writers’ workshop. Her short stories have been published in various magazines.

She has worked as culture page editor of Al-Thaqafi magazine, a columnist for Ad-Adwaa newspaper and presenter of the “Silicon Valley” cultural programme on Sudanese TV.