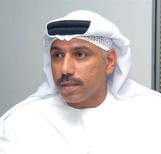 Adel Khozam is a poet, journalist, editor and broadcaster from the Emirates, born in 1963. He also writes on theatre and the cinema, and composes music and lyrics for theatre and TV series. Since 1993 he has published three poetry collections, and a history of visual art in the Emirates (Sharjah, 2000), a history of theatre in the Emirates, and a book of reflections, Maskan al-Hakeem, The House of the Wise Man (2010). His work has been published in many magazines. He lives in Dubai and works as director of programmes for Sama Dubai TV channel. He is also a fluent English speaker, having lived in the UK for several years while his wife was studying for a PhD.