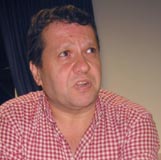 Abdo Wazen was born in Beirut in 1957. He is a poet, literary critic and translator.  He is currently literary editor of the online Independent Arabia (https://www.independentarabia.com/), after serving as cultural editor of the international daily Al-Hayat newspaper for many years until its demise.