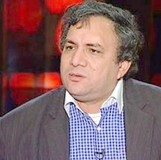 Ammar Ali Hassan (b. 1967) is an Egyptian novelist, literary critic, journalist and a scholar of socio-politics. He holds an MA and PhD in Political Science, and since 2010 has been a full-time writer.

His literary works to date include ten novels, eight collections of short stories, four works of literary criticism, and an autobiography. In addition he has published numerous works on political sociology. His works are recognized internationally and translated into many languages.