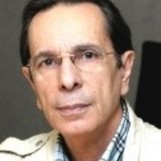 was born in Ashkilon, Gaza. He studied history at Alexandria University, Egypt, and in 1970 was deported to Jordan because of his political activities. He has lived in Jordan, Syria, Iraq, Russia, Lebanon, Cyprus and is now in London, where he works as an editor of Al-Sharq al-Awsat daily newspaper.

He has also worked at the Palestinian Centre for Research Studies and as a journalist and editor for many newspapers and magazines, including Al-Horria, Al-Ufuq, Sawt al-Bilad, Al-Quds al-Arabi, Al-Hayat, WTN (an American TV news network), and APTN-Associated Press.

His works include a collection of short stories, Ablah Khan Younis (Idiot of Khan Younis, 1977), a memoir and two novels. Ta'am al-Furaaq (Taste of Separation, 2001) is an autobiographical work and is excerpted in Banipal 15/16. His first novel, The Lady from Tel Aviv, was translated in English by Elliot Colla and published by Telegram Books in 2010. The Arabic original was shortlisted for the 2010 International Prize for Arabic Fiction.

His second novel, Destinies: Concerto of the Holocaust and the Nakba (2015) has been shortlisted for the 2016 International Prize for Arabic Fiction.