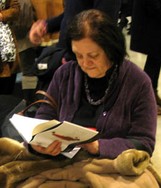 Samira Kawar is an experienced energy journalist who served as Middle East Editor at London-based energy publishing house Argus Media since 1999 until she resigned that post in March 2015 to concentrate on literary translation. She has contributed translations to Banipal since its foundation in 1998, and is a trustee of the Banipal Trust for Arab Literature. Two of her literary translations from Arabic to English have been published – the novel The Eye of the Mirror by Palestinian writer Liana Badr (2008), and the autobiography of the late Saudi writer Abdul Rahman Munif Story of a City: A Childhood in Amman (1996).