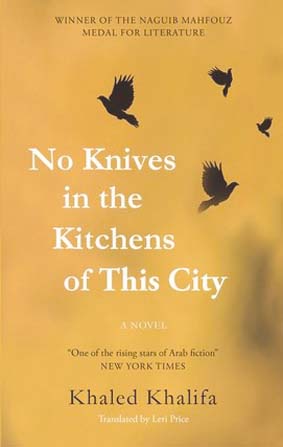 No Knives in the Kitchens of this City

The challenge of family

Broken dreams are the main themes of Khaled Khalifa’s latest novel, No Knives in the Kitchens of this City, which tells the story of the decline of a Syrian family over a period of sixty years. There are no winners in a country where freedom is limited not only by the regime, but also by the fear of other people’s judgement.

Through the eyes of the narrator, the reader gets to know the story of Sawsan and Rashid, the narrator’s siblings, and their mother and uncle, Nizar. Despite the complexity of the narration, which jumps continuously back and forth in time, the novel is an enjoyable reading which keeps the reader entertained till the end.

The beginning of the story makes immediately clear that the matriarch of the family is a defeated character. She has challenged her family and renounced her social status to marry a man from a lower class who, after having four children with her, abandoned the family to move to America with another woman. She, however, does not seem to be particularly upset by this abandonment and believes that soon she will marry another man. On the other hand, what causes her a strong feeling of shame is having a disabled daughter, Suad, whom she hides away from the sight of her neighbours, afraid of their judgement. She waits for the young girl to die to be released from the shame and be able to put the pieces of her life back together. Contrary to her expectations, Suad’s death only contributes to the destruction of the family. Her other children, Sawsan, Rashid and the narrator, who were very fond of Suad, are extremely affected by her death and resent their mother for her behaviour towards the poor girl. The family links become weaker by the day, while the mother sinks into dementia, becoming everything she has always been ashamed of.

Sawsan, the rebel and beautiful sister of the narrator, joins the paratroopers and starts working as an informant for the regime. After falling in love with an officer, Munzir, she leaves for Dubai with him, hoping to become his wife. However, Munzir chooses to marry another woman and Sawsan has to return to Aleppo. Once back in Syria, she starts regretting her past, feeling shame for ruining the lives of many of her fellow students when working as an informant, and therefore decides to look for purification by living a more modest and secluded life.

Rashid, a talented musician, is at first glance the only character who has a chance of succeeding in life. He plays in his uncle’s band and lives a quiet life until the day he becomes involved with a fundamentalist group and leaves Syria to fight against the Americans in Iraq. Rashid sees in martyrdom the meaning of life and is eager to die for his faith and reach heaven. However, when the Americans capture him, afraid of being tortured, he declares a fake Christian identity and manages to escape. Back in Syria, Rashid is haunted by the shame of having denied his faith to save his life.

Nizar, the narrator’s gay uncle, is the only character whose defeat is not caused by his own choice but by the judgment of a society that has yet to understand and accept homosexuality. In his youth, after spending some time in jail accused of sodomy by his own family, he had moved to Beirut and enjoyed the relative freedom homosexuals had in Lebanon. Forced to return to Syria after running out of money and struggling to pursue his music career in Beirut, he moves back to Aleppo where he becomes a famous musician. Despite his success, he is unable to live the life he desires and dedicates most of his time to helping his sister and her family.

Khaled Khalifa unfolds the events of this story with incredible talent, dealing with delicate topics, such as homosexuality and mental illness, with great sensitivity.

I particularly enjoyed the way he develops the characters. On the one hand, there are Sawsan and Nizar, extremely well constructed to the point that their behaviour can never be questioned because it mirrors perfectly their personalities. On the other hand, there is Rashid and the mother, whose personalities are more blurred, leaving the reader wondering the reasons behind some of their choices. Little is known about the unnamed narrator. He gives almost no detail about his life and refrains from any comment about the story he narrates, acting as a mere spectator.

Disguised under the mask of fiction, there is a clear intent by the author to express his political opinion towards the regime and the Leader, whose name and party are never openly mentioned. Khalifa does so through the words of the mother of the narrator for whom living under the regime is as if she is lacking the air to breathe, and through the description of the difficult life of Aleppo’s population. This culminates with the scene that gives the book its title, the scene in which a desperate man sets his family on fire to spare them the suffering of starvation, and then kills himself with a kitchen knife.

After more than five years from the outbreak of the Syrian war and the ensuing refugee crisis, No Knives in the Kitchens of this City is a much needed work of literature, which helps the foreign reader understand the suffering of the Syrian people without aiming at cheap emotional effect, but providing food for thought and an invitation to be ever more compassionate.

Go back to all online Book Reviews from Banipal issues