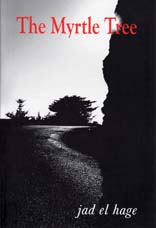 Or from our distributors:

“Better than any political analysis, this remarkable novel, set in a Lebanese mountain village, conveys with razor-sharp accuracy the sights, sounds, tastes and tragic dilemmas of Lebanon’s fratricidal civil war.

"A must read for anyone who wants to understand and grasp what makes this small country the astonishingly vital and diverse place it is.”
Patrick Seale

Click here for photo-reports of the launches in London, Melbourne and Sydney.

Jad El Hage's third novel (and his second written in English) is set in civil-war Lebanon.

Young Adam Awad, his wife and daughter live in the remote village of his family, in the Lebanese countryside where his uncle maintains there are no “vendettas and bloody feuds like in the North, no history of arms and bloodshed”.

He wants to restore his father’s olive press house and live an idyllic life farming in peace, but it is 1976 and the civil war is closing in. The village becomes divided, but still Adam is determined to find a way to stop the escalation . . .

Jad El Hage comments: “The most recent of our wars began in the 1970s and ended by stages in the early 1990s, depending on how one defines ‘beginning’ and ‘end’. This uncertainty characterised the entire conflict. The only certainty is that we killed each other for more than fifteen years.”

Extract from The Myrtle Tree:

"Our encounter was moving beyond casual chat.  Murshed’s throaty drawl was beginning to hit a nerve. He spoke about war like a coach about a game of football. He had the blueprints of coming battles all grafted into his brain. I dreaded pushing it any further for fear of ruining the Hakim’s efforts. A trickle of sweat seeped under my arms as I began:

“Let me tell you, Murshed effendi, how I quit hunting. It may give you an idea how far apart we are on the issue of killing. Last winter we had two heavy snowfalls. On the morning after the second, I took my rifle and walked down to the valley. The sun was so bright off the fresh snow that you couldn’t raise your eyes without sunglasses. A stunning day, one of those when your heart sings to be alive. I’m stressing this weather report because it affected my mood so much. Anyway, when I saw the shadow of a bird gliding over the white slopes, I turned and fished it down in a split second. It was a blackbird who’d found a morsel of food. It fell with a cry and hit a flat slab, still alive, still holding the food in its beak, panting, bleeding dark red dots onto the snow. I’ll never forget its bewildered little eyes, Murshed effendi. Those eyes were saying: you wouldn’t starve if you didn’t kill me. So why? That day I decided to stop hunting for good. Because through the death of that blackbird, I was given a rare insight into the tragedy of another creature.  And now you expect me to tear apart some animal to resurrect a killing instinct I’ve consciously chosen to bury?”

The officer stood up, flushed. He paced the practice room, scanning the recliner, the workshop table with all its broken and mended dentures, the stove, the medicine cabinet. He seemed at a loss for words. He went to the window and stared at my uncle’s back yard before turning back to me. “I had no idea people like you still existed, Adam Awad. I mean no offence, but yes, there’s a huge gap between us. As wide as that between reality and dreamland. I envy you this bliss. At the same time it shocks me, because it is, frankly, the bliss of ignorance.”
“Don’t worry about offending me, Murshed effendi. But there’s nothing about this war that makes me want to kill. I know I can’t stop it, just don’t ask me to be part of it.”


To order a copy of The Myrtle Tree in Australia contact