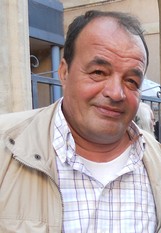 Mubarak Wassat (Ouassat) was born in Mzinda Youssifiya, Morocco, in 1955. A poet and translator, he published in Muwaqif magazine and newspapers until his first collection in 1990. He has translated, from French to Arabic, the works of many important writers, including of Fernando Pessoa, Henri Michaux, Rene Char, Tahar Ben Jelloun, Mohamed Khaireddine and André Breton. For two poems from Mubarak Wassat’s first collection, [On the Steps of Deep Water], go to Banipal 5.