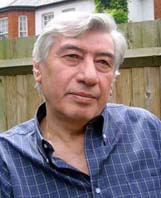 was born in Hama in Syria. He was a prolific writer, poet, playwright and critic, publishing his first collection of poetry, al-Dhul al-Akhdhar [The Green Shadow] in 1967 and since then 17 further collections. He also published two novels, twenty-four plays, translated twenty-three books from English, including the Iliad, the Odyssey and a biography of George Orwell, and wrote a number of television series.

He wrote regularly on Arab current affairs, and also taught at the Advanced Institute for Theatre in Damascus.

Banipal 21, Autum/Winter 2004 published a profile on Mamdouh Adwan by literary critic Faisal Darraj entitled "Mamdouh Adwan and the freedom of the prolific creator".