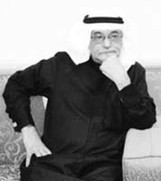 Suleiman al-Khalifi was born in Kuwait in 1946. He obtained a Bachelors degree in literary criticism from the Higher Institute of Dramatic Arts in Kuwait. He has published a number of poems, stories and critical studies in Al-Bayan magazine which is published by the Kuwaiti Writers Association. In 1972 he published a play called Summer Troubles and he subsequently went on to publish three collections of short stories and a collection of poetry. He has published two novels, Aziza, 2008 and Biban 2011.