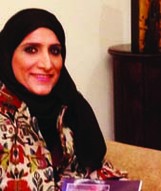 She studied Drama and Theatre at the Higher Institute for Dramatic Arts and is a member of the Committee for Reading Dramatic Texts for MBC TV. She has been writing short stories since the end of the 1980s and has published a number of texts in Kuwaiti newspapers. Her short story The Funeral’s Miaow (Muwa’ al-Jinaza) was awarded the Prize for the Short Story by the Emirati Writers’ Union in 1990. Her first collection of short stories, The Rain Falls, the Princess Dies (Yasqut al-Matar, Tamut al-Amira) was published in 2012.