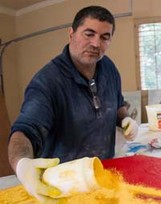 Mahi Binebine is a well known painter and, since 1992, the acclaimed author of nine novels. He was born in Marrakech in 1959. From 1980 he studied Mathematics in Paris, and later taught the subject for many years in Paris. He lived in New York from 1994 to 1999. Following a short return to Paris, he went back to the city of his birth in 2002.

Some of his works are in the collection of the Guggenheim Museum in New York, and some of his novels have been published in Arabic, English, Dutch, Spanish, Polish, German and Korean.

The French original of his novel Horses of God (reviewed in Banipal 46) – Les Etoiles de Sidi Moumen (Flammarion, 2010) – won the Prix du Roman Arabe as well as the inaugural Mamounia Literary Prize of Marrakech. The award-winning film of the book is directed by Nabil Ayouch.

Translator of Horses of God Lulu Norman, who was awarded the 2013 English PEN Award for outstanding writing in translation for this work, also translated Binebine’s Welcome to Paradise (Granta, 2003, original title Cannibales) which was shortlisted for the Independent Foreign Fiction Prize.

Mahi Binebine now lives, painting and writing, in Marrakech with his family.

Banipal commissioned an excerpt from Cannibales, translated by Lulu Norman for Banipal 9, (Autumn 2000), where Mahi Binebine was also the featured painter of the issue. He was later featured – the sub-heading Some readers reproached me for describing a Morocco that was too squalid – in an interview with Ignacio Cembrero, translated by Lulu Norman from its original publication in El Pais, in Banipal 10/11.

For all information about Mahi Binebine go to: http://www.mahibinebine.com