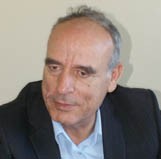 Hussein al-Wad is a university professor and researcher, born in 1948 in Moknine, Tunisia. He has written several books on classical and modern Arabic literature, notably on Abu al-Ala Al-Ma’arri’s The Epistle of Forgiveness, and on al-Mutanabbi and aesthetic experience among the Arabs and on the poetic language of Abu Tammam. His first novel, (Scents of the City), published in 2010, won the Tunisian Golden Comar Award. His novel His Excellency, the Minister is shortlisted for the 2013 International Prize for Arabic Fiction.