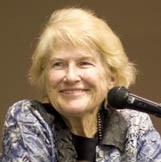 Mary Ann Caws is Distinguished Professor of English, French, and Comparative Literature at the Graduate School of City University New York, and a prolific author, editor, and translator from French, and on the faculty of the Women's Studies and Film Certificate Programs. Among her many books is Surprised in Translation (2006), a celebration of translators and translation.