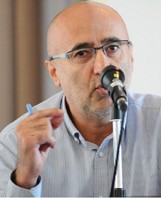 Marzuq Halabi is a writer, journalist and jurist. He worked for fourteen years as co-editor of the daily newspaper “al-Ittihad” printed in Haifa, overseeing numerous sections of the paper, including comment and analysis, culture, Israeli affairs, trade unions and legal issues. He taught Media in numerous universities in Israel. He writes about political philosophy, culture, literature and has an opinion column in the Lebanese newspaper “al-Hayat”. He lives in Haifa.