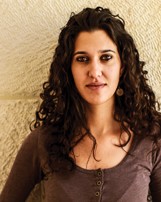 Asma'a Azaizeh was born in 1985 in the village of Daborieh in the Lower Galilee region of Palestine. In 2006, she qualified with a BA in English Literature and Journalism from the University of Haifa. She has been working as a journalist since 2004 and has written for a number of Palestinian and Arab newspapers.

Asma’a won the A M Qattan Foundation's Young Writer Award in 2010 and had her first collection of poetry Liwa published in 2011 by Dar al-Ahliya in Amman, Jordan.

She is currently presenter of a Palestinian television programme on culture and art, as well as a lecturer in creative writing. She is also active in several cultural activities including editing the poetry section of www.qadita.net.

Her poetry has been translated into English, German, Farsi, Swedish, Italian and Hebrew.

In 2006 she received her BA in Journalism and English Language from Haifa University.