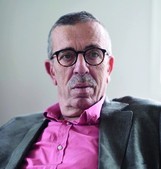 Jabbour al-Douaihy was born in Zgharta, northern Lebanon, in 1949. He holds a PhD degree in Comparative Literature from the Sorbonne and works as Professor of French Literature at the University of Lebanon. To date, he has published seven works of fiction, including novels, short stories and children’s books. His novel June Rain was shortlisted for the inaugural IPAF in 2008, and will be published in English by Bloomsbury Qatar Foundation Publishing in October 2012.