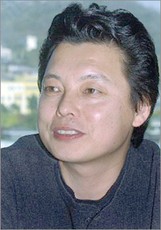 Jeon Seong-tae was born in 1969. In 1994, while still in college, he won an award for new writers from the journal Silcheonmunhak for his short story “Droving Hens”. Unlike most writers of his generation, whose works focus on everyday life in the city, he is a realist, depicting life in farming and mining communities. His debut story collection Burying the Scent (1999) was awarded the Daesan Creative Writing Fund. Jeon’s critically acclaimed stories deal with the problems of individual identity that arise from the oppressive effect of collectivism.