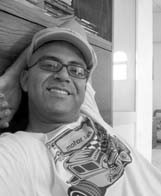 Nael el-Toukhy is an author, translator and journalist from Egypt. He was born in 1978 in Kuwait, and moved to Egypt in 1981. He published his first collection of stories (Technical Changes) in 2003, and has since published 3 novels. He has also translated two books from Hebrew. In 2009, he started a blog to translate texts from modern Israeli literature.